Since the start of the pandemic, our regular D&D game — which has always been in person — has shifted to online. We use Zoom to chat, and Roll20 to simulate the tabletop.

I’m comfortable using Roll20 as a player, but when it came time to begin planning my own campaign as a DM, I was stumped. The interface is wildly confusing, and the built-in tutorials aren’t up to the task.

Craig offered to walk me through the process of setting up and running a game. We recorded the whole thing, which is now available as five videos.

If you’re considering DMing a game in Roll20, I strongly suggest you start here. Craig’s a good teacher.

Way back in 2008, I announced a plugin for WordPress that made it easy to insert short bits of screenplay-like material into a blog post.

Max is checking his mail when he spots neighbor FRANK crossing the street, heading his way.

I thought we talked about this, Frank.

I was born naked and I’m not changing now.

I called these chunks “scrippets.” This plain-text format ultimately became Fountain, which in turn became the basis of Highland and other screenwriting apps.1

The Scrippets plugin still works — you can install it today — but WordPress has moved on to the concept of “blocks.” These are discrete elements of a post that can do specific things. You can find blocks for code syntax, tables, and even poetry verse.

There should be one for Fountain.

If you’re a WordPress coder who’d like to tackle this project, here are some thoughts to get you started.

So if you feel like giving it a shot, go for it! You certainly don’t need our permission.

If you have something you’d like us to see, or a question we can answer, write ask@johnaugust.com Many listeners have asked how Craig and I record our weekly podcast. I wrote about it in 2013, but a few things have changed. So here’s an updated look at our standard operating procedures and gear.

Scriptnotes producer Megana Rao and Craig’s assistant Bo Shim figure out when we’re going to record. It’s usually a Thursday or Friday, late in the afternoon. Megana and I have usually talked over potential topics, but Craig and I will also text during the week to discuss. If it’s a Three Page Challenge, Megana will send each of us PDFs of the entries she’s picked.

We’re all working off a shared outline in WorkFlowy, which includes the episode number, today’s topics, listener questions, various housekeeping bits, and our One Cool Things. I recently made a template. If there’s anything we need to read aloud — for example, a quote from an article — I usually copy-paste it into this outline.

Since Craig works in Pasadena and I work in Hollywood, it’s not practical for us to be in the room together, so we record the podcast on Skype. This is the part many people can’t fathom — we’re almost never in the same room together. I lived in Paris during 2016 and 2017, yet we kept doing the show pretty much as normal. Whether you’re miles or time zones apart, you can do it.

It takes practice to keep up a conversation when you don’t have the usual physical cues. The first few episodes were rough. But I think the podcast is actually much better with Craig and I being apart; like the audience, we’re only hearing each other’s voice, so everything we’re communicating needs to happen in speech.

I don’t care about hearing myself through the headphones, but if you do, you may want to consider a setup that lets you plug headphones into the mic or mixer. If you let the audio round-trip through the computer, the lag will drive you crazy.

While Craig and I are talking on Skype, each of us has QuickTime running on our own computers to record only our side of the conversation. (File > New Audio Recording…) When we finish recording, we each save our audio into the same shared Dropbox folder. From there, editor Matthew Chilelli yanks out the audio and marries the two tracks in Logic.

Many podcasts simply record the Skype call, saving the step of marrying the two tracks. But it’s very handy to be able to manage the two sides of the conversation separately. We can edit out background noise and generally keep it much tighter.

As a backup, we have Call Recorder for Skype running. It’s saved our bacon a few times.

Matthew ends up editing two versions of the episode: the normal one and the premium version, which includes an additional segment at the end. When he’s finished — generally Monday at around noon — he’ll put them back in Dropbox. Megana listens to them and writes up the text for the post, along with links and the outro. I sign off, then all that gets added into the files.

Megana then uploads the premium file to our subscription service, where it comes out immediately. She schedules the normal version to come out Tuesday morning.

For hardware, we started with Dan Benjamin’s really useful guide to podcasting gear, but ultimately made different choices over the years. I’ll include Amazon referral links for items available there, but certainly consider local retailers — or items you may already have.

For my mic, I’m using the Shure BETA 87A Supercardioid Condenser Vocal Microphone mounted on a Heil PL-2T boom with some generic pop screen. This mic requires a pre-amp and USB interface, so I’m using the Focusrite Scarlett 2i2, which feels like overkill but has been problem-free for many years.

When I’m traveling, I’ve been packing the Samson Q2U Handheld Dynamic USB Microphone instead. It’s really good for the price and simply plugs into USB. When we have remote guests I’ll often drop this mic off at their house if they’re in town, or just Amazon it to them if they’re somewhere else.

Before the pandemic, we were recording more shows in-person at my office using a RØDECaster Pro, which is genuinely terrific. It combines a pre-amp, USB interface and recorder into a single interface. The new Zoom PodTrack P4 looks to meet a similar need and is probably also great. I’ve had a good experience with various Zoom recorders over the years.

For live shows, I’ve generally been recording on the Zoom H6 digital recorder. Even if we’re using audio from a sound board, I’ll still aim the Zoom at the audience to gather crowd noise.

We use WorkFlowy to outline Scriptnotes before we record. After 462 episodes, I finally decided to make a template for it so that I wasn’t typing it all from scratch every time. So I made a skeleton outline, which you can see here.

Excited for the all time I was going to save, I copy-pasted the outline into TextExpander, the app I use for such things.1 I assigned it an abbreviation and tried it in WorkFlowy.

It pasted plain text, with none of the indentation and formatting I wanted.

Naturally, I tried to Google a solution, but nothing turned up. So I experimented with different options. It turns out the trick is to Export the template (using the three-dot menu on the left) and choose OMPL as the format. 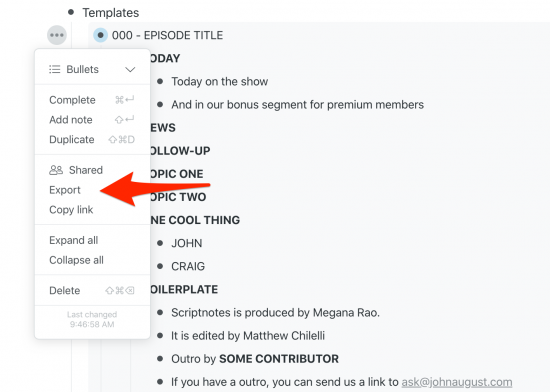 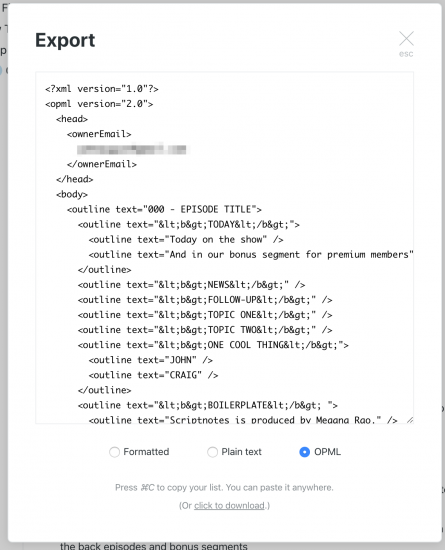 A mess, right? But it works.

Copy-paste it into TextExpander. When expanded into WorkFlowy, it’ll be properly indented and formatted.

For the record, the amount of time I spent figuring out and blogging this time-saving technique is now probably a wash.