A listener pointed me to this listing on Barnes & Noble for “Aladdin: Screenplay” by Meredith Day. The listener writes:

This is clearly a bootleg, and the Kindle preview shows it’s just a movie transcript without any proper formatting. You don’t even get credit as a screenwriter in the book.

On Amazon you can find dozens of books by Meredith Day, all of them “screenplays.” But they’re not actual screenplays. At most they’re transcripts, perhaps pulled from the closed captioning. 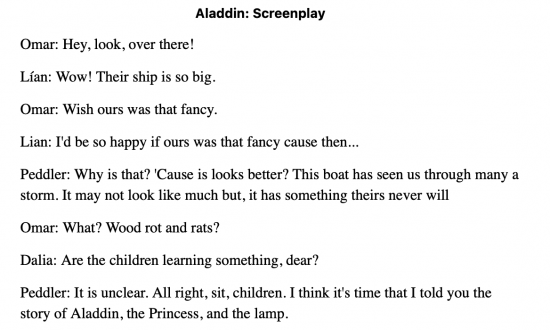 The text isn’t the only thing that looks to be yoinked without permission. The cover artwork shows up in the Artstation portfolio of Vietnamese artist Khánh Khánh as “Aladdin 2019 Fanart.”

I was wondering if you ever do anything to legally take these down? Have you ever considered official publications of your previous screenplays besides just the digital releases in your library?

Let’s take a moment to look at the copyright issues here.

Aladdin — both the character and the basic story elements — are wholly in the public domain. Everyone has the right to retell the story of the kid, the lamp and the genie.

Disney’s Aladdin, including its songs and dialogue, are property of the Mouse House. This book isn’t the public domain version of Aladdin; it’s a transcript of the film. It’s hard to imagine it passing any of the standards of fair use, as it’s a commerical endeavor that uses the work in whole without commentary or transformation.

What’s more, it invites confusion about whether it’s an authorized product. To my knowledge, Disney hasn’t published the screenplay anywhere, but they have put out a well-reviewed novelization.

As one of the credited writers of Aladdin, I considered filling out Amazon’s “Report Infringement” form, but Disney is the more properly aggrieved party here. It’s their call.1

As frustrating as it is to think of someone profiting off this hacky transcript, I honestly don’t think they’re profiting that much. A quick Google search will find you the same text for free. The best case for taking these fake scripts off Amazon and Barnes & Noble is that they’re terrible and certain to disappoint anyone who purchases them.