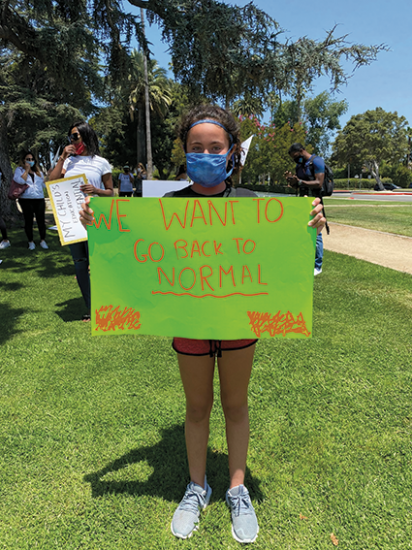 The image that accompanies this article on a school reopening protest captures a major mood in July 2020.

The photo comes courtesy of Victoria Conti, who is also quoted in the piece:

I don’t want my kids to stay in front of a computer all day long. It’s not good for health, for mental health, there are too many reasons that it’s not good.

Conti is right, of course. It’s not healthy for any of us to sit in front of computers all day, particularly children.

My daughter is 15. Like most American kids, she finished her school year in Zoom classes of debatable quality. I want her back in school with her friends, just like I wanted her to go to her beloved sleepaway summer camp, and to be able to hug her grandmother.

Just like the girl in the photograph, I want to go back to normal.

But it’s simply not possible. Normal is not an option. Not now. Probably not until there’s a widely-available treatment or vaccine.

Demanding a return to normal in July 2020 is like yelling at the night to be less dark. It’s out of your control and everyone’s control. The more you complain about it, the more miserable you make yourself and others, and the more time and energy you waste.

Conti’s frustration about online classes is valid and understandable. I share it. But the real opponent isn’t the school district; it’s the coronavirus. That’s the barrier between teachers and students and in-person classes resuming. The virus doesn’t care because it’s a lump of genetic data. Scientists and public health officials care deeply but they can’t offer a cure at the moment.

In psychology, one strategy for dealing with these situations is radical acceptance. You start by acknowledging the reality of the situation — and how much it sucks — so you can begin thinking about the future.

Individually and as a society, we need to move past this idea of “back to normal” when it comes to coronavirus. Stop saying it. Stop pretending it’s an option. It’s night and the sun’s not coming up any faster. We need to do the best we can in the dark.

And we can do surprising things! For example, American retailers quickly adopted contactless payment and curbside pickup, along with a staggering amount of plexiglass. Businesses realized that a lot of work can be done from home. Talk shows figured out how to film from attics.

We’ve been forced to rethink and adapt because normal was not an option. It still isn’t. We need to acknowledge that this pandemic sucks and keep going.

Back in 2006, I answered a reader question about page counts:

Every screenwriting book I’ve read, class I took, and basically the first rule I learned says:

ONE PAGE OF A PROPERLY FORMATTED SCRIPT = APPROX. A MINUTE OF SCREEN TIME.

I know one page of say a battle can last five minutes whereas one page of quick dialogue my last ten seconds if the actors talk fast. So my question is, is this rule true?

I replied that the page-per-minute rule of thumb didn’t hold up to much scrutiny, and offered examples from my own work.

Then a few weeks ago, I started thinking about this question again, and realized there was an opportunity to reframe the question in a more concrete way:

For screenplays, what is the correlation between screenplay length and running time?

I asked data scientist Stephen Follows if he’d be up for tackling this question. He jumped into action, gathering 761 feature screenplays and comparing them to the running times of their finished films. Today, he published his findings.

The results largely match what I expected, and what I wrote in 2006:

The one-page-per-minute rule of thumb doesn’t hold up to much scrutiny. True, most screenplays are about 120 pages, and true, most movies are around two hours. But the conversion rate between paper and celluloid is rarely one-to-one.1

While Follows finds there is some obvious correlation between page count and running time, the rule of thumb barely works in aggregate but isn’t very predictive for any given project.

Why does it matter? Because too many folks in the film and television industry have internalized one-page-per-minute as an axiomatic truth rather than a crude estimate. Any script that is longer than 120 pages is perceived as being too long. Indeed, some studios’ contracts specify that the writer may not deliver a script longer than 120 pages.2

Worse, the page-per-minute rule of thumb puts too much focus on arbitrary sheets of never-printed paper rather than the words they contain. If we’re worried about the length of anything, it should be scenes and sequences. But in 2020 we continue to treat screenplays as if they’re hand-typed on dead trees, forgoing digital tools that would allow for better security, collaboration and version control.

As an industry, we’re afraid to move to new formats for screenplays because we’re worried it’ll break the page-per-minute standard. But we don’t need to worry, because the rule of thumb was never really true.

Is it appropriate to try to estimate a project’s running time based on the script? Absolutely.

Before a project goes into production, the script supervisor — an experienced professional who works beside the director on set — generally performs a “script timing” by estimating the time for each scene. It’s not perfect, but it better reflects reality. If a script times out to three hours, better to know it before production, so you’re not shooting scenes that won’t make it into the film.

Is there an opportunity for computer-generated running time estimates? Probably.

With machine learning, I can imagine systems that better predict how words on the page will reflect minutes on screen. But I wonder if it’s a false goal. Ultimately, running time is a factor of film editing. Scenes get dropped in post, and it’s very hard to anticipate these changes when looking at a script in preproduction.

This analysis was done on feature films, but every TV show faces similar issues. However, long-running shows have the advantage of knowing how their specific show works. My hunch is that every NCIS script falls in a narrow range of scenes and pages because they know what they need.

Forbes recently named Kylie Jenner one of the “60 richest self-made women.” Ann Friedman isn’t having it:

Americans love “rags to riches” stories. We mythologize immigrants who came to our shores with nothing and rose to become titans of industry. We celebrate women like Dolly Parton and Oprah who were born into poverty and achieved greatness through talent and determination.

We’re believers. Hopers. Dreamers. America isn’t a country of what is, but what could be.

The term “American Dream” is surprisingly recent. It traces back to the 1931 book The Epic of America by James Truslow Adams, in which he describes —

“That dream of a land in which life should be better and richer and fuller for everyone, with opportunity for each according to ability or achievement.

It is not a dream of motor cars and high wages merely, but a dream of social order in which each man and each woman shall be able to attain to the fullest stature of which they are innately capable, and be recognized by others for what they are, regardless of the fortuitous circumstances of birth or position.”

Like Martin Luther King in his “I Have a Dream” speech, Adams is describing a vision and a hope, not a reality.

Yet too many of us act as if we’re already living in the American dream, that our country is essentially fair, that everyone has the same opportunities if they just apply themselves.

According to Pew, only 1 in 5 people think that the American dream is out of reach for their family. America’s founding myth is that anyone can find success by working hard. Even as inequality grows — particularly along race and gender lines — we want to believe that “self-made” millionaire status is as achievable for the African American daughters of unmarried teens in Mississippi as it is for Westchester-raised Exeter students and reality television stars.

Friedman argues that by focusing on the Kylie Jenners and Mark Zuckerbergs, society is turning a blind eye to the poorest Americans who desperately need our attention.

But I think it’s actually worse than that.

When we celebrate the notion that anyone could become the next billionaire, we encourage this mass delusion that good times are always just around the corner. Sure, money might be tight right now, but you could strike gold tomorrow!

The reality is, most Americans are much closer to becoming poor than becoming rich. Economic mobility works both ways. You can climb, but you can also fall, and fall fast. A dozen things could wipe out your life’s savings overnight, including illness, addiction, fire, fraud, and crime.

But in America, reality isn’t a priority — after all, we’ve got The Dream. So instead of funding safety net programs, we cut them. We deregulate industries and destabilize health insurance markets.

None of this makes sense if we acknowledge that we’re all likely to need these programs one day. Eventually, fate’s arrow is going to point at us, and our friends and family. We are much more likely to become broke than billionaires. We need to act accordingly.

In this special mini-episode, John and Craig talk through the upcoming WGA strike authorization vote — what it actually means, and why they’re both voting yes.

We also discuss how strike authorization votes are a strange bit of negotiation theater, which Craig in particular would like to see end.