On Scriptnotes 541, Craig and I discussed which of the classic D&D attributes (Strength, Intelligence, Wisdom, Constitution, Dexterity and Charisma) were most important for an aspiring film and TV writer. We ranked intelligence first, while acknowledging that charisma was important for the social aspects of the job. We felt wisdom was gained through experience — which it is, in the real world.

Our discussion generated a lot of listener emails. Nick Roth’s response felt like it deserved its own post. So here it is in full.

Sometimes, as a writer earlier in your career, and especially in the context of tv writing (my background is as a lower level writer on a network sitcom), it feels like you can’t just be a wizard who has maximized intelligence with secondary emphases on charisma and wisdom.

It feels like you have to multi-class as a Wizard/Paladin.

It’s a stupid multiclass. You have to approach your work like you’re on a holy quest, and everyone expects you to be a melee tank, but all you really want is to cast spells from the shadows. You have to have intelligence and charisma, and you have to have both strength and constitution to survive in a writers’ room, where you need thicker skin than mage armor can provide. And you also need to get yourself into the right place at the right time, so you can’t even take dexterity for granted, because there are barbarians out there with advantage on initiative rolls who will beat you to opportunities.

You have literally no dump stat. And, in this campaign setting, there are famously OP Backgrounds you probably don’t have access to — like having famous parents or being literally Malia Obama.

The point is it can feel impossible to roll this character. But here’s the thing: the best characters and the best campaigns aren’t made by rolling great attributes and min-maxing your abilities. They are made by figuring out the most hilarious and surprising and heartwarming ways of interpreting your critical successes and your critical fails. Okay, so you’ve insanely chosen to be a wizard-paladin and you rolled three negative modifiers. Big whoop. You can still have the best time saving the multiverse with this zany School of Police Procedurals Wizard who has taken an Oath of Musical Comedy. Maybe you fight a dragon, or maybe you reboot Cop Rock!

I feel like I lost the thread there, but you get the idea. Just like we must imagine Sisyphus happy, we have to love all the parts of being a screenwriter, no matter how absurd a multi-class it requires, even when we roll a 1 and had -3 to the check to begin with.

I can’t in good conscience recommend you watch all of this video, the third and final part of a series by Technoblade. But there’s wisdom to be found here.

To the outside world, I’m an ordinary Minecraft YouTuber, but secretly I’ve spent the last year fighting to maintain my spot as the number one potato farmer in Skyblock. Opposing me is SquidKid, the former rank number one, a man whose obsession with potatoes is rivaled only by my own.

Like Amundsen’s expedition to reach the South Pole, this is best thought of as a race, with two men competing to reach 500 million potatoes farmed. As with many battles, even the winner lost:

why did i spend 600 hours on this war. this was a terrible idea.

Yes. It’s an objectively terrible idea to farm digital potatoes. But we can actually learn from Technoblade’s futile quest. Late in his video, he makes two salient observations:

The truth is we’re all potato farmers to some degree. We chase meaningless status symbols. We optimize systems rather than questioning whether they should even exist. We villainize our competition and slink into ethical gray areas.

Technoblade wrote his own cautionary tale, an Aesop fable for the digital age. In the end, he wasted a lot of time, but at least he learned something from it.

I gained a lot from the Potato War: patience, discipline, carpal tunnel.

Farming 500 million digital potatoes is stupid, but registering 500,000 voters could swing an election. Exploiting a quirk in how minions behave is pointless, but convincing our cells to manufacture a target virus protein is a game-changer.

The difference ultimately isn’t in the amount of work, but the choice of the objective.

With this in mind, I’ve started asking this question about how I’m spending my time: Is this actually productive, or just potato farming?

On October 24, 2019, I presented the Hawley Foundation Lecture at Drake University. It was an update and reexamination of a 2006 speech on professionalism I originally gave at Trinity University, and later that year at Drake.

What follows is a pretty close approximation of my speech, but hardly a transcript. It’s long, around 14,000 words. My presentation originally had slides. I’ve included many of them, and swapped out others for links or embedded posts.

If you’re familiar with the earlier speech and want to jump to the new stuff, you can click here.

Back in 2006, I gave a speech here at Drake entitled “Professional Writing and the Rise of the Amateur.” In it, I presented my observations and arguments about how the emergence of the internet had made the old distinctions between amateurs and professionals largely irrelevant. Tonight I want to revisit that speech and look at what still makes sense in 2019, and more importantly, what I got wrong.

To do that, we need to start with a bit of time travel so we can all remember what 2006 looked like. 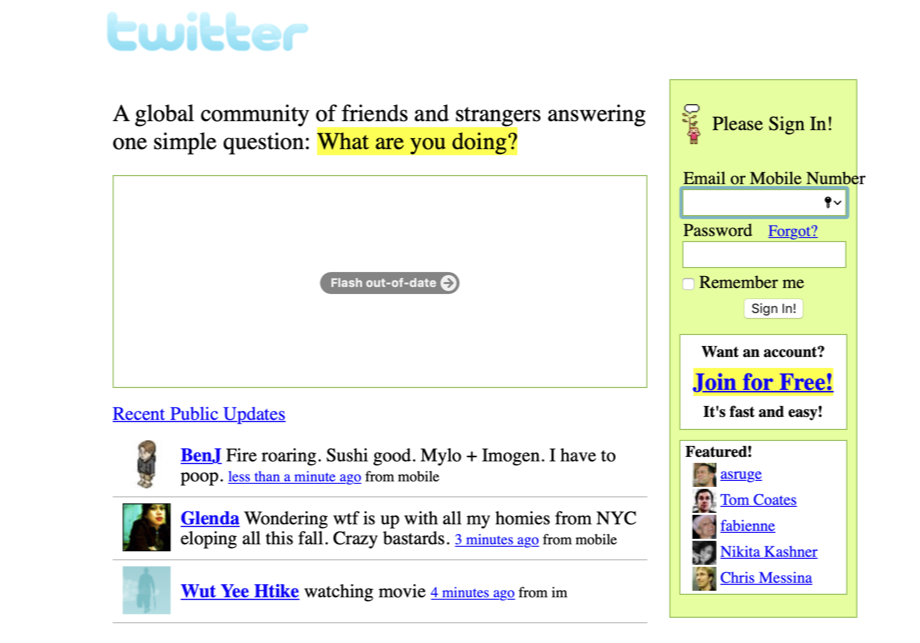 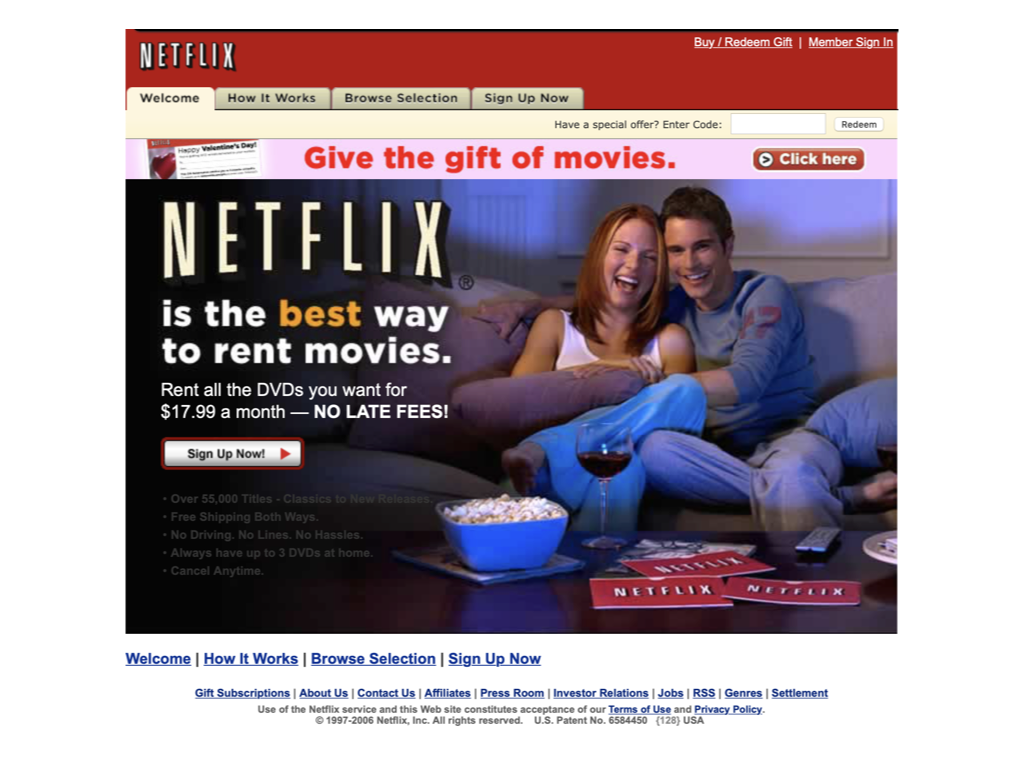 Oh, 2006 was a simpler time. The internet existed, but it wasn’t as all-consuming as it is now. We had blogs. We had MySpace. But we didn’t have the internet on our iPhones. Because iPhones wouldn’t come out for another year.

However, even in this innocent age, issues would arise that would feel very familiar today. We had fake news and trolls and pile-ons.

For example, back in 2006, I started my speech with this anecdote:

> On March 21, 2004, at about nine in the morning, I got an email from my friend James, saying, “Hey, congrats on the great review of Charlie and the Chocolate Factory on Ain’t It Cool News!”

Let’s start by answering, What is Ain’t It Cool News? It was a movie website started by a guy named Harry Knowles. It looked like this: 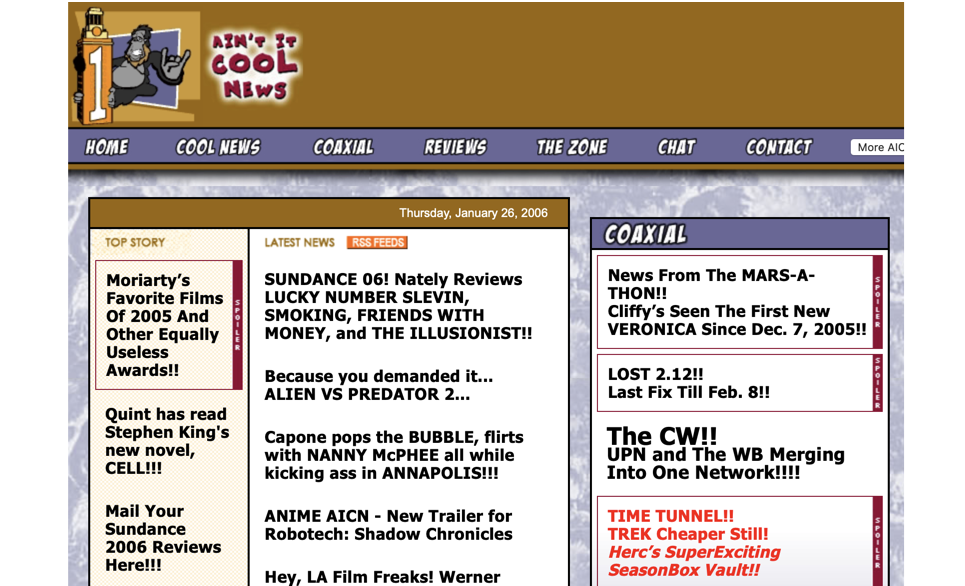 Ain’t It Cool News billed itself as a fan site. I’d argue that it was an incredibly significant step towards today’s fan-centered nerd culture, for better and for worse. Online fandom has brought forth the Avengers and fixed Sonic the Hedgehog’s teeth, but it’s also unleashed digital mobs upon actors and journalists, women in particular.

Back in 2006, the nexus of movie fandom was Ain’t It Cool News. It wasn’t just a barometer of what a certain class of movie fan would like; it could set expectations and buzz. Studio publicity departments checked it constantly.

So, back to my email from James. He’d written:

> “Hey, congrats on the great review of Charlie and the Chocolate Factory on Ain’t It Cool News!”

This was troubling for a couple of reasons.

First off, the movie hadn’t been shot yet. We weren’t in production. So the review was actually a review of the script. Studios and filmmakers really, really don’t like it when scripts leak out and get reviewed on the internet, because it starts this cycle of conjecture and fuss about things that may or may not ever be shot. So I knew that no matter what, I was going to get panicked phone calls from Warner Bros.

I click through to Ain’t It Cool and read this “review.” And it’s immediately clear that it’s a complete work of fiction.

The author of the article, “Michael Marker,” claims to have read the script, but he definitely hasn’t. He’s just making it up. It is literally fake news.

Fortunately, back in 2004, I knew exactly one person at Ain’t It Cool News. His name was Jeremy, but he went by the handle “Mr. Beaks.” So I emailed him, and say, hey, that review of the Charlie script is bullshit.

Actually, I don’t say that. I say, “That guy is bullshitting you.” It’s not that I’m wronged, no. It’s that that guy, Michael Marker, is besmirching the good name of Ain’t It Cool News by trying to pass off his deluded ramblings as truth. How dare he!

And it works. Mr. Beaks talks to Harry Knowles, and Harry posts a new article saying that the review was bogus. 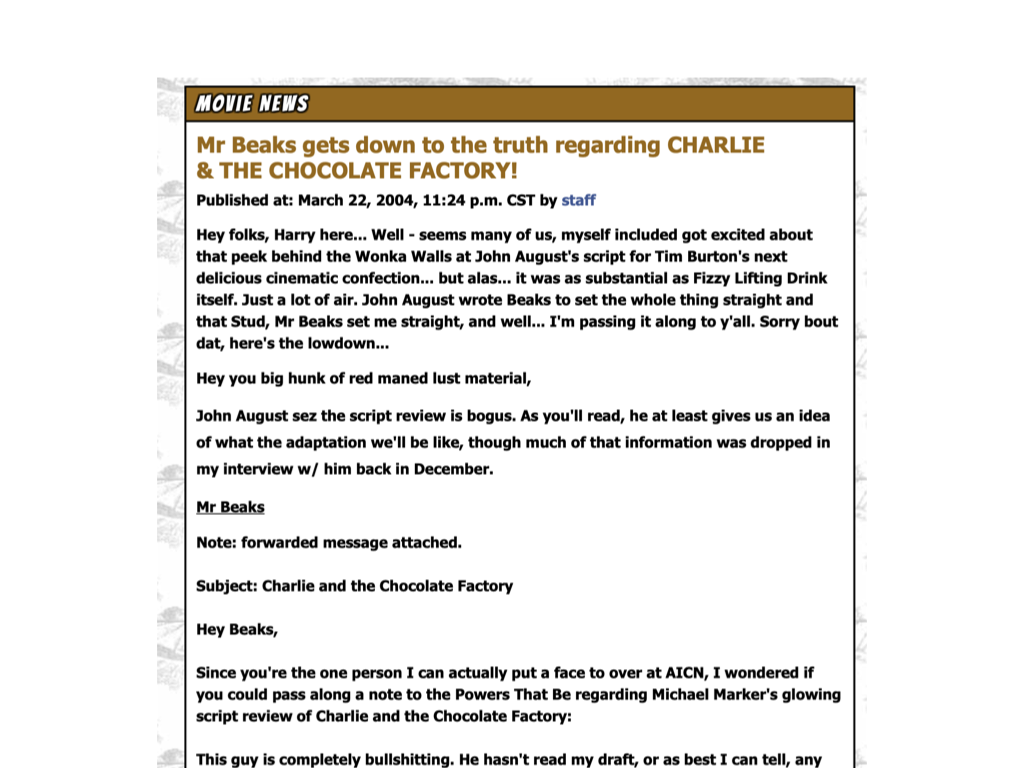 I can’t help but think — this article was wrong, but it was really, really positive. What if it had been negative? Would Mr. Beaks or Harry Knowles have believed me? Probably not. They would have said, “Oh, sour grapes.” My complaining would have made the readers believe the bogus review even more.

It might have led to the Streisand effect, where complaining about something just brings more attention to it.

Back in 2006, if you tried to really go after any of these film-related sites, criticizing them for say, running a review of a test screening or just outright making shit up, you’d get one standard response:

Their defense is that they’re amateurs, so they can’t be held to the same standards of the New York Times or NBC.

That became the topic of my speech in 2006: the eroding distinction between professionals and amateurs.

END_OF_DOCUMENT_TOKEN_TO_BE_REPLACED

Yesterday, I was talking with a colleague about a project I’m considering writing. It would be an adaptation of a very successful series I’ve long admired, and falls in a genre that’s comfortable to me. Even better, the studio really wants to make it, so it wouldn’t be pushing a boulder uphill.

But there are downsides that keep it from being a no-brainer.

Commensurate with its high profile, the property comes with a lot of strong voices and opinions. And it would be a tremendous time commitment, which would prevent me from working on some other long-simmering projects.

So, should I pursue it? My colleague asked a question inspired by Marie Kondo’s book and Netflix series:

“Does it spark joy?”

She sort of meant it as a joke,1 but it was exactly the right question. It clarified everything.

Some projects really do spark joy. You feel it from the first moment you start thinking about the idea. For me, these projects include Charlie’s Angels, Go, Big Fish, Charlie and the Chocolate Factory, plus an unannounced movie I just turned in.

Yes, they were all exhausting slogs at some point. Work is work. But when I compare them to other assignments with equivalent pay checks, the difference is stark.

So: does this new project spark joy?

Not really. It sparks curiosity and nostalgia. It would cool to work on it, and a very high-profile assignment. But if I didn’t get the job, I wouldn’t miss it. Which is exactly why I shouldn’t pursue it. The studio will find another writer who dreams about the chance to tackle that adaptation — or at least fakes it convincingly.

As a screenwriter, you often don’t have luxury of being so choosy. I went after a lot of projects for which I was faking that spark, especially at the beginning of my career.2 As I talk about on the most recent Scriptnotes, there’s no shame in hustling to get work.

But it’s also important to recognize when you need to stop hustling. To stop hoarding. To let some things go.