Since the early days of the site, I occasionally run posts by writers who can share their experience working in the industry. In this case, Paige wrote in to Scriptnotes with her take on screenplay contests.

My name is Paige Feldman. I was a guest/contestant on a Scriptnotes live show about a year ago (the one with Ryan Reynolds and Phoebe Waller-Bridge). That’s still one of my best quarantine memories.

I’m writing because contest season is fast approaching. Nicholl, AFF and Final Draft all have deadlines in May. While I know most aspiring screenwriters will be champing at the bit to apply, I wanted to share something I discovered about the cost of entering contests like these: it’s a lot of money for little upside.

In June 2020, I embarked on an experiment. For four months, I kept track of every screenwriting contest I was advertised (either through email, targeted ads, or coming across them organically on social media). And for every contest that I could enter without doing more work (e.g. I had a completed script I could ostensibly enter), I would take the cost of the entry fee and put it in my savings.

Over the course of four months, from June to October — so not even “contest season” — I saved $1424.

I already knew screenwriting competitions were an industry, but the amount is just shocking to me. What even is this screenwriting contest industrial complex? And why is it? And how many people is it actually helping?

At the end of my experiment, I didn’t have answers to those questions, but I did have an extra almost-$1500 lying around thanks to my savings scheme. I decided to use it to further my career in a way a contest could never do.

I took one of my already-written pilots and adapted it for audio. Then, I hired actors and recorded it remotely over Zoom (modeled after how you, John, had me send you audio recorded on my computer for that show last year). I hired a composer to write original music, an artist to design a logo, and used YouTube to teach myself how to edit and process audio. And now I have an audio pilot up across podcasting platforms. Plus, it was such a fun experience that I wrote the remaining nine episodes of season 1 and we’re starting to record them this weekend!

Now, instead of a bunch of contest rejections, I have an actual product that I can share with people: How to Fall in Love in the Hard Way

I wanted to write to you about this because I feel like the rhetoric that contests are the best way for unknown writers to break in continues to grow (especially on Twitter). I think it’s important to point out how much of an industry screenwriting competitions are becoming, how they help very few writers who invest that cash into them, and that there are other ways of becoming a working writer than winning a contest.

In my case, I met a director who hired me to write a script via someone I met in an acting class I accidentally took five years ago. That ended up being a better use of my money.

This isn’t a slam on all screenwriting competitions or the writers who’ve found some success through them. But for most aspiring screenwriters, I believe there are better ways to spend your time and money.

Following up on my earlier post, here’s an update on Aladdin’s residuals.

Note that these are total writer residuals. As Aladdin’s co-writer, I get half, so I’m simply doubling what I see in my individual residuals report.

The first four categories are pretty self-explanatory. You can find more information about them in the WGA’s residuals survival guide.

New Media — EST stands for Electronic Sell-Through. This is when a customer purchases a download, which they then own forever. If you buy a movie for $19.99 on iTunes, that’s an EST. It’s the digital equivalent of someone purchasing a DVD at Target. The residual is calculated as 0.36% of the company’s accountable receipts.

The final category is a little confusing. Even after serving on the negotiating committee for the last MBA, I ended up emailing a colleague at the Guild for clarification.

New Media — SVOD combines very two different ideas. The full title for this category should really be something like New Media — Rental and SVOD.1

Rental is what you think. If you’ve ever paid $1.99 for a movie on iTunes and had 48 hours to watch it, that’s an electronic rental. The residual is calculated at 1.2% of the studio’s accountable receipts.

SVOD stands for Subscription Video on Demand, services like Netflix, Disney+ and Hulu, also referred to as streamers. The residual is calculated as 1.2% of the amount the studio receives for licensing the movie to the service. For example, MGM might license an old James Bond movie to Amazon Prime for 12 months. The screenwriter would get a residual based off the price MGM was able to charge.

In the case of Aladdin, it’s available exclusively on Disney+. Disney is never going to license it to Netflix or Peacock or Amazon Prime. So any fee Disney-the-studio is charging Disney-the-streamer is really just numbers on a spreadsheet. They’re the same company.

Now you’re asking: Wait, if this residual is 1.2% of a made-up number, how do you know it’s a fair price?

Self-dealing is always a concern, and has long been an issue in television. My colleague at the Guild writes:

When that happens the MBA requires the company to impute a license fee based on comparable pictures. This is an issue happening across all the streamers and is one of our most important enforcement efforts.

For 2020 Q3, this lone residual was worth nearly a quarter of million dollars for Aladdin. It’s both hugely important and largely opaque.

I don’t have a breakdown to show how much of this line item came from rental versus the imputed license fee, but it’s something I’ll be watching closely in the years ahead.

John welcomes legendary screenwriter Eric Roth (Forrest Gump, A Star is Born, Dune) to discuss his writing practice and how he gets in the head of his characters.

We answer audience questions on how to trust your voice and approach adaptations.

Finally, in our bonus segment for premium members John and Craig discuss election night and the days after. Like we did after the 2016 election, we’re including the bonus segment on the main feed this week. (Note: This was recorded on Friday before the final states were called.)

UPDATE 11-20-20 The transcript for this episode can now be found here.

I’ve written about residuals many times, and it’s a frequent topic of conversation on Scriptnotes.

But as a quick refresher, let’s go to the definition:

RESIDUALS Payments made to a film or television writer when their work is sold to another venue, such as a feature film sold on DVD, or a network television episode shown in syndication. These fees are percentages negotiated and collected on behalf of writers by the Writers Guild of America.

I’m mostly a feature writer, so that’s been the bulk of my personal experience with residuals. For example, here’s a look at the residuals I’ve earned from Go from 1999 to 2011. 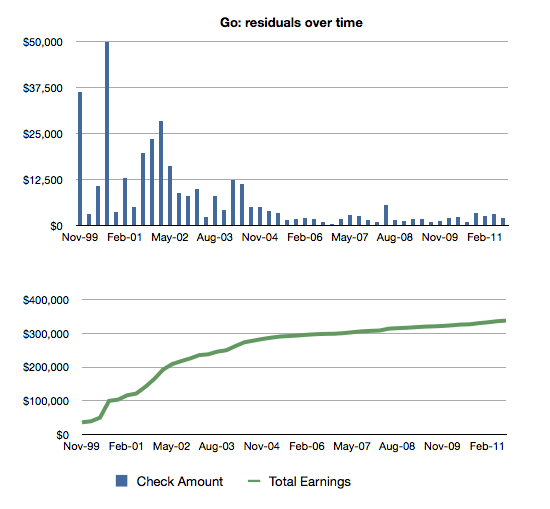 For feature writers, residuals are an important way of keeping money coming in the door in the years between getting movies made. Without residuals, it would be difficult for many feature writers to stay full-time writers.

As Craig and I often discuss on the podcast, most WGA members — including a lot of elected board members — don’t have firsthand experience with feature issues, including residuals. So I wanted to highlight some numbers about how feature residuals have changed over the years.

I’m comparing two movies I wrote: 2005’s Charlie and the Chocolate Factory and 2019’s Aladdin. I picked them because they’re very similar movies — four-quadrant family films that made a lot at the box office.2

As the writer, I know exactly how much these films paid out in WGA residuals.3 Here’s what each film generated in its first 15 months after concluding its theatrical release:

Home video is what you think: DVDs, or VHS back in the day. Pay TV is cable, like HBO. New Media EST means “electronic sell-through,” like iTunes and such. There are rates for both purchase and rental. New Media SVOD stands for “subscription video on demand.” Think Netflix or Disney+.

Here’s what this looks like in a bar chart: 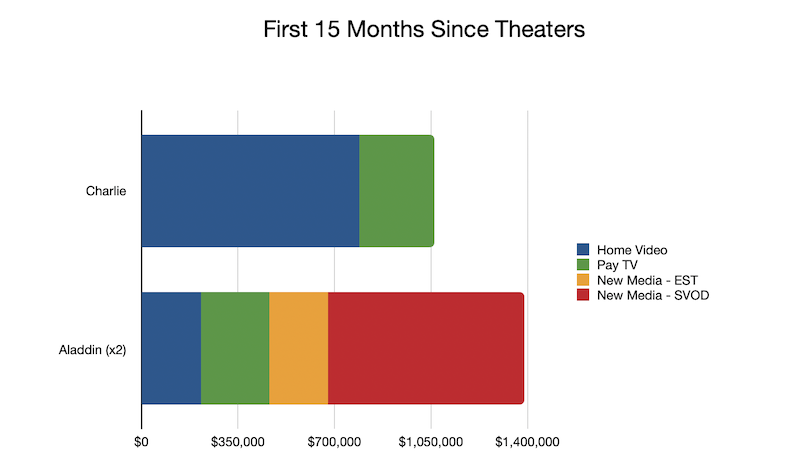 As consumers, it’s obvious that SVOD is the future. We’re not buying many DVDs. We’re cancelling our cable. And while we might still rent a movie, we’re more likely to see what’s on Netflix.

As writers, we should be watching SVOD residuals very closely. They’re not built on the same foundations as our other sources, and could quickly collapse.

Unlike home video or EST, SVOD residuals aren’t based on how many times someone watches our work. The streamers are loathe to share any information about viewership. So instead, SVOD residuals are treated more like pay TV and broadcast residuals in that writers are paid a percentage of the license fee. Basically, we get a cut of whatever the studio charges the streamer.

That works great when Warners charges Neflix $100 million for Friends. But how do we make sure Disney isn’t selling Aladdin to Disney+ for less than it’s really worth?

One way to look at self-dealing is to bring in comps. If you can show that a streamer paid $5M for a three-year license to a similar film, it’s hard to argue that it’s “really” worth only $1M. But that only works when there really is a market. Every studio basically has its own streaming service, so it’s increasingly difficult to show any comparative prices.

An even bigger concern is what happens when these movies debut on the streamers. Remember: residuals are paid only on money earned outside of the initial venue. If Aladdin had debuted on Disney+ rather than in theaters, would it have generated residuals at all? I suspect that’s an open question, one that feels especially relevant as more movies are being pulled from theaters during the pandemic.

Craig and I talk about these issues on episode 472 of Scriptnotes.