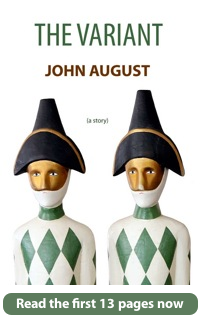 The Variant is a short story by John August.

It’s a spy thriller with a strong dose of science fiction, in the vein of The Prisoner and The Man from U.N.C.L.E., or the short stories of Jorge Luis Borges.

After 35 years working at the Central Library, Vincent Lewis has perfected the art of unremarkability. But when a terrified woman falls through his bathroom ceiling, he’s forced back into a life of gunfights, double agents and paranormal research. The secret he’s been keeping for nearly four decades might reunite him with his lost love, or kill millions.

John August is the screenwriter of eight feature films, including Go, Big Fish, Charlie and the Chocolate Factory and Corpse Bride. He wrote and directed the 2007 movie The Nines. This is his website.

Where can I read it?

Do you have an iPad, iPhone or iPod Touch?

The Variant, for the Kindle app

Do you have a Kindle?

The Variant, on Kindle

How about a sample?

Absolutely. You can get the first 13 pages of The Variant right now.

If you dig it, come back and get the whole thing.

That’s the price we’ve seemed to set for a unit of cultural entertainment that’s enjoyable but not necessarily life-changing. For example, most of the games in the iPhone App Store are 99 cents. If one looks appealing, you’ll buy it, because 99 cents isn’t a lot to gamble.

If you think of a novel as being like a music album, a short story is sort of like a single. It’s self-contained and enjoyable on its own. No coincidence, a single on iTunes is 99 cents. 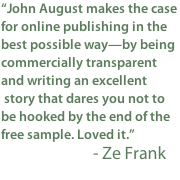 If after reading the lengthy free sample, you decide you want to read the rest of the story but don’t want to pay 99 cents — or for some reason can’t — send an email to sales@johnaugust.com.

If you can present a coherent case for the story should be free (to everyone, or specifically in your situation), I’ll send you the .pdf at no charge. Note: In doing so, you agree to let me print your email in part or in full.